With the iPad due to launch in the UK on the 28th of this month, I thought I’d give my two cents on what it is and isn’t good for, if you haven’t already read everything there is to read about it elsewhere.

I’ve been lucky enough to acquire one unexpectedly through work :) and have been playing with it for about 3 weeks now. It’s the 16GB, WiFi (no 3G) version. And I still don’t like putting it down. What follows is a brief(ish) rundown of what I like and what I don’t like about it.

“…the iPad has filled a niche that didn’t previously exist”

The iPad is bullying its way into the market. It’s not quite powerful enough to replace a laptop and it’s not quite small enough to replace a mobile device. But it is so intuitive to use, so aesthetically pleasing to hold and so beautiful to look at that somehow you keep going back to it. After a couple of plays with it, you’ll find yourself wanting one even though you may not actually need one. So in that sense, the iPad has filled a niche that didn’t previously exist.

Like the iPhone, the iPad has the app store. And like the iPhone, this means the functionality of your device will exponentially increase. If there’s something you find it doesn’t do by default, there’s a good chance somebody has thought of it and built an app for it, so your device will get better with time. There really is an app for everything. 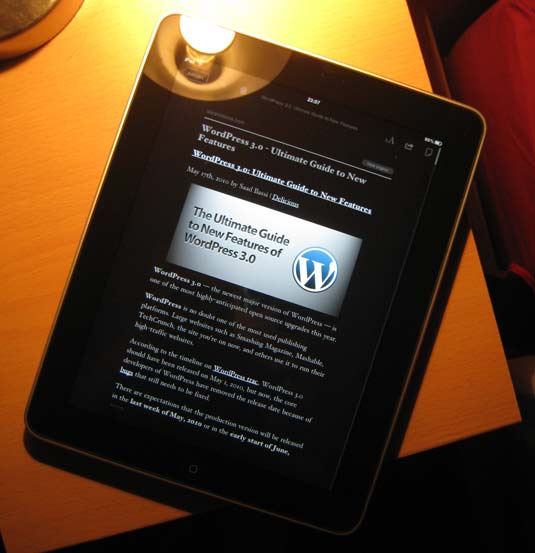 For those of you that are worried about the rendering capabilities of the built in browser…don’t. Initially, I was intrigued as to how it would display websites. With the option to view websites in both portrait and landscape modes, I had visions of having to re-design my sites to make them fluid width in order to compensate for the extra screen real estate that landscape mode offers. But having visited a truckload of sites, there appears to be no/very little difference in the how sites are displayed on the iPad compared with a regular computer. After all, it is essentially Safari – a webkit browser. It was always going to do a good job.

If you buy an iPad expecting it to revolutionise the way you work and play, you’ll end up disappointed. It never promised to oust the laptop. It never promised to cover every aspect of your daily computing needs. But given time and the introduction of the right apps, I think the iPad will become strong enough to all but eradicate the average netbook. It has a lot going for it with its ease of use, speed, instant access and portability. It’s agile, it’s flexible and with the app store, it’s getting better.

It is what it is: a luxurious, web and email browser with fantastic portability, charming good looks and the sexiest interface known to man. I keep going back to it. Whether I need to or not is another question. But for now, it’s a question I’m not too bothered about answering.